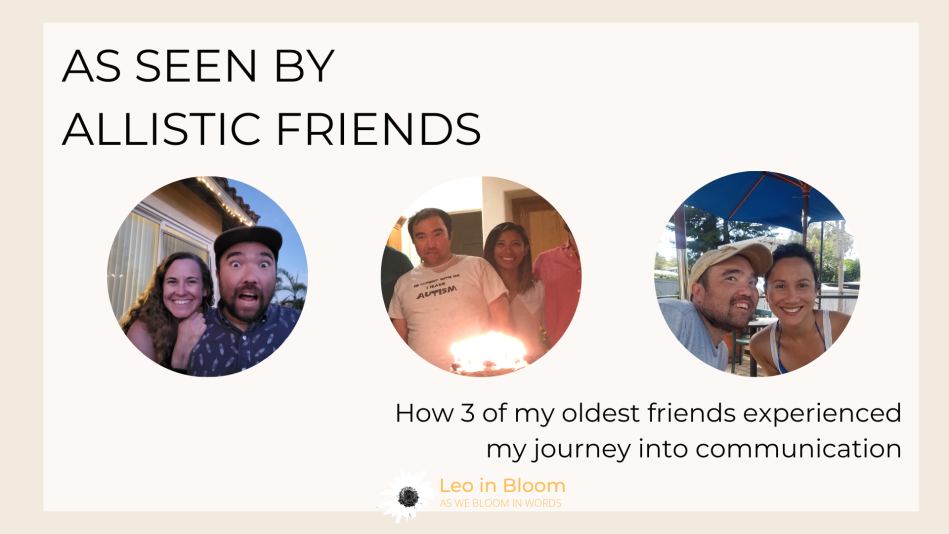 I am so absolutely amazed at how many new friends I have made through Spelling! But I am also in awe of how Spelling has enriched the friendships I had before. I asked three of my best friends from my “before Spelling” life, non-autistic friends who showed me kindness despite my inability to communicate with them, how my access to communication affected them. I am so thankful they shared their thoughts with me to share with you!

Proud. Excited. Awestruck. These are some of the words that describe how I felt watching Danny gain access to communication through spelling.  I’ve always known he was an intelligent and thoughtful person, but it’s been such a pleasant surprise to see his humorous side come out as well.  He is quite witty ;). I also am excited to see how much his interests have grown since being able to communicate more.  I find most people already struggle with putting themselves out there to try new things and I can’t imagine the extra degree of difficulty Danny had to face with not being able to fully communicate his thoughts and feelings before spelling.  Now with his ability to better communicate with others, I have found it inspiring to watch him take on new interests and adventures. He’s putting himself out there and I can’t wait to see what he decides to pick up next!

I have been Danny’s Best Buddy since 2009, initially “officially” through the program and then on our own. We would spend almost every weekend hanging out, exploring all that San Diego has to offer, from the beach to the zoo to hiking. While we developed our own way of communicating over the years, I was always frustrated by Danny’s inability to share highlights from his week, tell me what he was interested in lately, or even express what he wanted or needed from me when we were hanging out.

I remember reading “The Reason I Jump” by Naoki Higashida, or hearing a news story about a young nonverbal autistic woman that discovered her voice using a computer keyboard, and being so excited by the possibility that Danny might able to communicate, somehow.

In 2015, Tara shared with me Danny’s first letter to his family from an early S2C session, and I cried in happiness to finally hear Danny’s “voice”. But it wasn’t until Tara was home with Danny during the COVID lockdown that they had the time and space to really learn to communicate through spelling together, with Tara as Danny’s CRP, that Danny was truly able to communicate fully and freely for the first time. And then the floodgates opened, and Danny and I were able to chat regularly over zoom, and later in person. He and Tara interviewed me for their podcast “The Ocean & Us”. Danny was writing poetry and editorial pieces that were getting published in magazines.

It has all been so amazing for me to witness and experience, and I am thrilled that Danny is now sharing his thoughts and feelings, his true self, with the world, and beyond that becoming an advocate for spelling for other nonspeaking folks. We have been practicing spelling together as well, and I hope that we will also become fluent communicators, but for now I am just reveling in his journey and enjoying watching him soar!

It’s been amazing to watch Danny’s journey these last few years. In a way, it’s seemed so fast, but the reality is it’s been decades coming and I have been so thrilled to see the leaps he’s making.

I’ve been friends with Danny’s sister, Tara, for a few decades now. While I’ve known Danny and his family for a while, I can’t say that I’ve ever really had the chance to truly get to know Danny, until the last few years.

I think the best analogy I have for what his speller’s journey looks like to me, would be it’s like watching someone learn a foreign language. It seems similar in some ways to what it feels like to be in a different country, unable to speak the language. There are so many amazing things to see and talk about! You have so much you want to say, and you can say it perfectly, beautifully in your language! But not in theirs and so no one understands you. And sometimes people assume, because you can’t talk like them, that you must be lacking in intelligence or depth.

And we all know learning a language and feeling disconnected is hard, but at least someone learning a foreign language can call home and express themselves fully. That hasn’t been the case for Danny.

I am, of course, in awe of his intelligence. His writings are brilliant, his observations on point (cheeky and hilarious). But I think the thing that most impresses me about Danny is, even with years of being treated as a “foreigner” he is so empathetic and patient and kind. Instead of thinking “me” Danny he thinks about “us”. And he’s able to balance that, thinking about other people, understanding what they’re going through, with kindness to himself. He seems to understand what so many of struggle with. That we are, all of us, worthy.

Having only recently found his voice, his priority is making sure that other people have theirs. How beautiful that is, and what a wonderful example that is.

0 comments on “As seen by allistic friends”